WLAK instructors are dedicated to teach traditional Japanese style Shotokan Karate-Do. They are all volunteers sharing teaching duties while continuing to train themselves. They all have  30 – almost 50 years of martial arts experience. 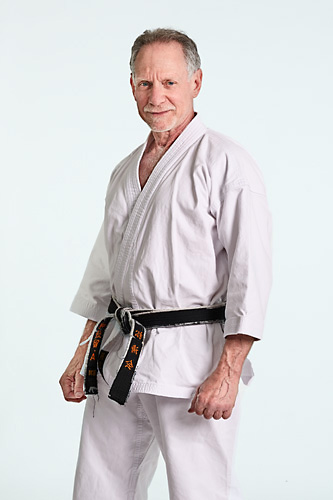 Alan is a 6th degree black belt in Shotokan Karate and a senior instructor at the West Los Angeles Karate School. He has been training in Karate since the mid-1970’s. In addition to his training and teaching in Los Angeles, he has trained all over the globe, including in Hawaii, Fiji, New Zealand, Australia, Hong Kong, Japan, South Africa, England, Canada and Israel. Following in the footsteps of his Sensei George Takahashi, Alan taught the UCLA Extension Course in Karate for many years after Sensei Takahashi retired. Alan’s other passions include his family and his continuing professional life as a lawyer.  Alan is a volunteer instructor at the Westside YMCA. 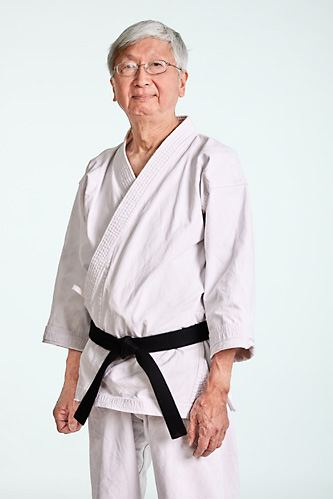 A practitioner of Shotokan karate since 1975, Steve has been an instructor for more than 30 years at the West Los Angeles Karate School.   He began his karate training under Sensei George Takahashi at the UCLA Extension program while they both worked at UCLA.  Upon completion of the program, Steve joined the West Los Angeles Karate School at Pico and Sepulveda near the campus and he has been training ever since.

Steve was a volunteer soccer coach with the Palisades YMCA and with the AYSO while his two children were growing up in the 1980’s.  A scientist by profession, Steve enjoys traveling with his wife, reading, and the opera as well as doing physics research.

Steve considers it a privilege that he and Alan have been training together for most of their adult lives. 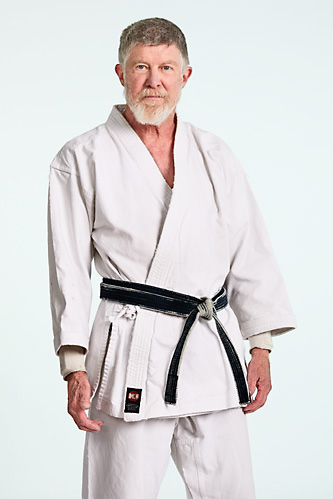 Mak is a 4th degree black belt in Shotokan Karate and an instructor at West Los Angeles Karate School.  He has been training at West LA since 1980 and teaching since the late 80s.  He has a background in wrestling and competed at both High School and University levels.  In addition to his Karate training, Mak has run about 30 marathons in about that many years, and enjoys downhill skiing and extended backpack trips in the High Sierra.  He is employed in a senior staff engineering position in the aerospace industry. 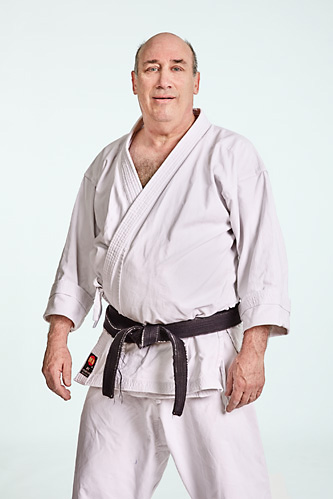 David is a 4th degree black belt in Shotokan Karate and an instructor at West Los Angeles Karate School. He has been training in Karate since 1990 and prior to Karate trained and competed in Judo both as a child and during college. When he can, he visits other Shotokan Karate schools in the Los Angeles area and around the world. David has been involved in YMCA programs with his children as Tribal Chief and Chief of the Nation for the Palisades – Malibu YMCA. He has been on the board of his community’s homeowner’s association for many years and does community service with his family. David works in Real Estate.  David is a volunteer instructor at the Westside YMCA.

George Takahashi is the founder and chief instructor of the West Los Angeles Karate School. He was born in Idaho, USA and grew up both in the United States and in Japan. A graduate of the University of California, Los Angeles, with a B.A. and an M.A. in Political Science, he taught Japanese language at UCLA full time for twenty years. He has written several articles on Japanese culture, language and the martial arts. He also authored a book entitled “An Adventure in English Language Space: A Key to the Mysteries of Prepositions”, published in 1998 by Vantage Press Inc., New York. A second book entitled “Japanese Learning and Teaching: A New Psycho-Logical Approach” was published in 2016 by Xlibris US.

Sensei Takahashi was privileged to train under both Sensei Tsutomu Ohshima and Sensei Hidetaka Nishiyama, both of whom were direct pupils of Master Gichin Funakoshi, the founder of Shotokan. Sensei Takahashi was one of the first American students to be awarded the rank of Shodan in December 1959. He was instrumental in bringing Sensei Nishiyama to Los Angeles in 1961 and was one of his senior students for over a decade at the L.A. Central Dojo.

Sensei Takahashi was awarded an 8th Dan in March 2004 by AFISK (American Federation of Independent Shotokan Karate-do). He was also awarded the Honorary Degree of Doctor of Philosophy from the Ken Studies Institute in 1990 along with the congratulatory letters from George Deukmejian, then Governor of the State of California and Pete Wilson, then U.S. Senator.

We are privileged to benefit from Sensei Takahashi’s wisdom, experience, skill and wit, and are proud to call him Sensei.

KUMITE:Three-point sparring (sanbon kumite):
1. Attack side: step in, attacking face with lunge punch, three times in succession (wait for separate command for each attack); Defense side: step back, execute rising block three times, executing a counter punch to the stomach after the third rising block.

2. Attack side: step in, attacking stomach with lunge punch, three times in succession (wait for separate command for each attack); Defense side: step back, execute down block three times, executing a counter punch to the stomach after the third down block.

KATA:
1. Your choice from the group Tekki Nidan, Tekki Sandan, Bassai Dai, Kanku Dai, Jion, Jitte, Hangetsu, Empi, Gankaku, Chintei.
2. One of the Heian kata, chosen at random by the examiners.
3. (At the option of the examiners) one of the Tekki kata.

KUMITE:
1. Jiyu-Ippon Kumite (semi-free): Attack side: attack face punch, stomach punch, front snap kick, side-thrust kick, roundhouse kick, and back kick. For each point of attack, first attack starting with left leg forward, then with right leg forward. Defense side: stand in fighting stance, allowing the attacked to set the distance. Block and counter attack with appropriate techniques.
2. (At the option of the examiners) sparring with higher-ranked member

When passing an examination one advances to the next level.  You start out taking the 8th kyu exam and then continue through the kyu ranks, numbers getting lower as one advances.  3-4 months of training are required for the lower ranks and one has to train a full year after 1 kyu before attempting taking the 1st Dan – Black belt exam. Dan examination numbers start at 1st Dan (Shodan) and go up from there.

We always welcome new students.  Whether you are a beginner, intermediate or advanced student you can train and learn Karate with us.  Feel free to contact us or show up before any of our classes for information and training or just to watch a class.  We encourage you to participate in a class to get more feel for what Karate is. Wear light gym clothing or Karate gi, no shoes.

The cost of classes is only a membership to the YMCA
New students can train the first week for free.
Wednesdays from 8-9:30 pm and Saturdays from 1-3 pm

Karate originated hundreds of years ago in Okinawa, but was greatly influenced by an even older tradition from China. Literally, Karate-do means the way of the empty hand, referring to the fact that its practitioners use no weapons to attack and defend, but only the hands, feet, and body. Yet karate-do – is a way or path that is much more than merely physical action. It is founded on a grand philosophical and spiritual tradition based on Bushido and Zen Buddhist principles. Through hard training and practice, karate develops not only the body, but also the mind and spirit, with its ultimate aim being the perfection of one’s character. There is no true karate without integrity, commitment to strong moral principles and respect for others.

Karate training involves practicing the basics of blocking, punching, and kicking, utilizing correct body dynamics in accordance with physics principles. “Katas” or forms provide another level of training. They are sets of choreographed movements which link basic karate techniques against imagined opponents attacking from all directions in combat. Basic techniques and katas are performed “solo.” However, applications or “bunkai” from the katas are often practiced with the aid of one or more partners. Finally, sparring or “kumite” drills with a partner or with multiple partners allow the practice of the art in realistic (yet controlled) combat and self-defense situations.

Karate drills emphasize core body strength and movement, hip rotation, rapid limb expansion and sharp physical focus, all of which when correctly utilized through serious training result in extraordinary concussive power. Sustained training provides physical exercise, builds endurance, enhances flexibility and fosters mental discipline and courage in the face of adversity.  West LA Karate differs from many other karate studios in its adherence to karate as a martial art rather than predominantly as a competitive sport. The real competition is only within each student. Each student works towards self-improvement in accordance with his or her abilities. 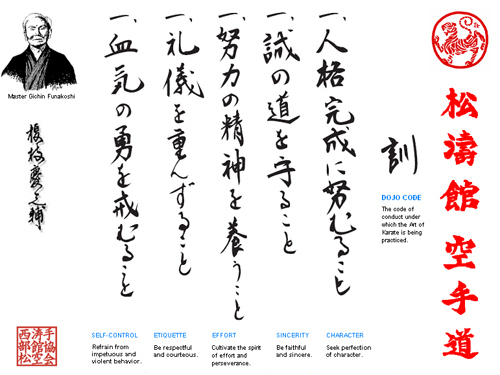 The Shotokan style of Karate was developed by Master Gichin Funakoshi. Gichin Funakoshi was born in Shuri, Okinawa in 1868. As a boy, he was trained by two famous masters of that time. Each trained him in a different Okinawan martial art. From Ankō Azato he learned Shuri-te. From Ankō Itosu, he learned Naha-te. It would be the melding of these two styles that became Shotokan karate.

Master Funakoshi wrote with the pen name “Shoto.”  Therefore, it became common to call his karate school Shotokan (“kan” meaning “house.”)  However, Master Funakoshi did not call his art Shotokan; rather he simply referred to it as karate.

The ultimate aim of karate is “in the perfection of human character” through dedicated training. While trained to “kill with one blow” (“ikken hisatsu”) in the protection of one’s precious life, a karate practitioner favors awareness and avoidance over physical confrontation and conflict.